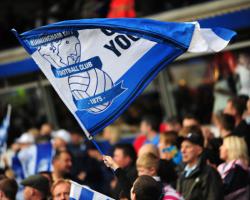 football.co.uk/match_reports/birmingham_bristol_rovers_3697734-9.shtml">Birmingham 3-0 Bristol Rovers: Match Report - view commentary, squad, and statistics of the game as it happened.


Robinson makes it worth the wait


The defender last found the net for West Brom in a 2-0 FA Cup triumph at Peterborough in January 2009 but his collector's piece at St Andrew's set Blues on their way in a delayed third-round clash against plucky League Two opponents Bristol Rovers.


Robinson headed home at the back post from Shane Ferguson's corner in the 35th minute, and lively winger Chris Burke added a quickfire double in the closing stages, handing Lee Clark's side their first home victory since October 1.


Rovers, despite lying 52 places lower in the football pyramid, put up a strong fight and their army of 2,358 supporters were able to travel back down the M5 proud of their side's efforts.


Yet it is Birmingham who will now host Swansea, conquerors of Manchester United, on January 25 having already knocked the Welsh outfit out of the Capital One Cup earlier this season.


History was not on Rovers' side having failed to get the better of Birmingham in their last 11 meetings stretching back to 1980, while they had never tasted success at St Andrew's.


But it was they who enjoyed the first clear-cut opening after just three minutes as Eliot Richards was sent through, only to be denied by Colin Doyle.


The early excitement subsided as the first half went on but the home supporters present were brought to their feet soon after the half-hour mark as Robinson headed home from close range.


Richards tested Doyle from long range prior to the break before Mitch Hancox replied with an effort of his own at the other end which Steve Mildenhall collected at the second attempt.


Within two minutes of the restart Zigic headed straight at the Rovers goalkeeper from a good position as Birmingham pressed strongly in search of a second goal, Robinson also heading into the side-netting.


Olly Lee's 25-yard strike brought a good save out of Mildenhall before the goalkeeper collected from Zigic's shot on the turn.


Richards' long-range free-kick forced Doyle to tip over before, at the other end, Robinson, now with a taste for goals, brought a great parried stop from Mildenhall.


Home manager Clark admitted ahead of the match that he recognised the importance of the tie and the financial benefits on offer to the cash-strapped midlands club should they progress.


And he would have been delighted to see Burke latch onto Zigic's through-ball and score in the 85th minute.


There was further joy to come just minutes later as the Scot converted from the edge of the area, ensuring Birmingham got back to winning ways after seeing a 10-match unbeaten run ended at the weekend.