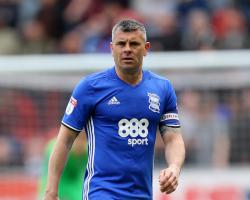 The Villa centre-back has accepted his apology for the contact.

But the Blues defender has been found guilty and his campaign is now over, with the suspension running into the first game of next season

"The Birmingham City defender was charged with violent conduct in relation to an incident in or around the 68th minute of the game against Aston Villa on Sunday (23 April 2017) which was not seen by the match officials at the time, but caught on video.

"The player denied the charge, however, it was found proven."

Birmingham, who appointed Harry Redknapp as boss last week after Gianfranco Zola quit, have two games left in the Sky Bet Championship - against Huddersfield and Bristol City - and are just two points above the relegation zone.