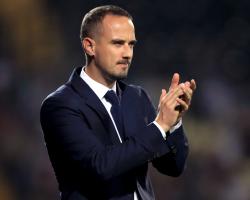 Baggaley, the 19-year-old Birmingham goalkeeper, was drafted in for the Lionesses' friendly with Spain after Liverpool's Siobhan Chamberlain withdrew with an abdominal strain.

"When I found out about the call-up I was sitting down to watch the Soilhull Moors match," she told FATV

"The goalkeeping coach Lee Kendall gave me a ring and told me I'd be coming to Spain, and now I'm in Madrid

I didn't expect it."

Baggaley is not a completely new face, having worked with the team at St George's Park and worn the Three Lions at Under-17, U19, U20 and U23 level.

"I have been brought into training sessions when I was part of the Next Gen squad but to be called up to the senior squad officially is a dream come true," she said.

"Hopefully I can learn a lot this week."

That was a creditable result against opponents England have not beaten since 1974, but Sampson is still looking for refinements.

"To get through 90 minutes against a very good French side without your goalkeeper having to dive, you know that's a very, very good defensive performance," he said

"But we need to improve with the ball

We had so many moments on the counter-attack where we picked the wrong pass and lacked a bit of composure.

"But as the confidence grew, that got better

We saw that with the chances we created."

The draw for Euro 2017 takes place in Rotterdam on November 8, with England among the top seeds.