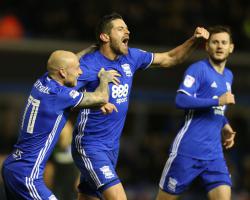 The striker will become a permanent Blues player on January 3 after agreeing a contract until 2020, the Clarets have announced.

Th e switch is the first new boss Gianfranco Zola has approved, the Italian having been impressed with the on-loan 27-year-old in his first week at the club after replacing Gary Rowett as manager

Jutkiewicz has six goals in 17 appearances for the Sky Bet Championship club after initially joining on loan in August having failed to score in 35 games for Burnley after a ÃÂ£1.5million move from Middlesbrough in 2014

Birmingham had negotiated an option to buy when Jutkiewicz joined just before the summer's transfer deadline.

Blues are expected to make several more signings next month having handed Zola ÃÂ£10million to spend, with the money for Jutkiewicz coming from that pot

Zola lost his first game in charge, a last-minute 2-1 defeat to high-flying Brighton on Saturday, to leave Birmingham eighth in the table, three points behind the play-off places