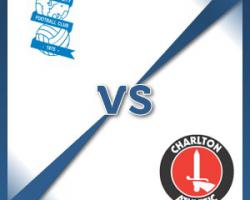 Birmingham V Charlton - view commentary, squad, and statistics of the game live.Shinnie a doubt for BluesAndrew Shinnie is a doubt for Birmingham's final home game of the season with Charlton

Diego Fabbrini could feature, though, after flying to Italy to get a new face mask after his initial one was broken in Wednesday's 1-0 win over Reading

The on-loan Watford forward was playing in a mask after breaking his nose but saw it damaged by what boss Gary Rowett claimed was a punch by Nathaniel Chalobah.Charlton look set to be without Alou Diarra after the midfielder was forced off with a knee injury during last weekend's win over Leeds.Jordan Cousins came on for Diarra and is likely to start along with Johann Berg Gudmundsson, who also began the game on the bench.Boss Guy Luzon has been rotating his starting line-up in recent weeks so Rhoys Wiggins, Roger Johnson and Simon Church will also be pushing for recalls.Johnnie Jackson (leg) and Callum Harriott (ankle) are set to miss out again while Franck Moussa remains absent with a long-term knee injury