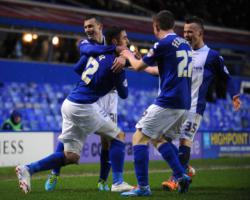 Birmingham will be without the suspended Paul Robinson for the visit of in-form Sky Bet Championship leaders Leicester.


The experienced defender was booked for the 10th time this season in Saturday's FA Cup defeat to Swansea and starts a two-match ban.


Kyle Bartley, who has been sidelined since New Year's Day with a hamstring injury, is set to replace Robinson, while Blues boss Lee Clark has confirmed Tom Adeyemi will start for the first time in a month after overcoming a back problem.


Peter Lovenkrands made his comeback from a groin injury at the weekend and he is set to feature once more as Birmingham aim to avoid a third straight home defeat.


Leicester have been dealt an injury blow with the news that Liam Moore will be out for around three weeks with a fractured rib.


Moore collided with a goalpost early on in the Foxes' home win over Middlesbrough. The defender, a transfer target for Fulham, was immediately taken for X-rays and it was initially thought there was no break but subsequent scans have shown there is damage to one rib.


Marcin Wasilewski replaced Moore against Boro and he is likely to retain his place in the team, while striker Chris Wood is back in training after missing out on Saturday with a tight hamstring. On-loan Arsenal defender Ignasi Miquel could return from a thigh injury for the weekend trip to Bournemouth.