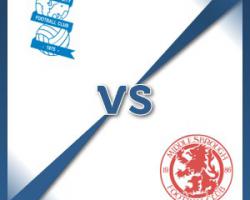 Gavin Gunning, Michael Morrison and Matt Green are out with knee injuries but are recovering well.Gary Rowett told the club's official site: "Morro is making good progress and he is in a lighter strapping now

Gav Gunning and Matt Green have been out on the pitches running."

Middlesbrough head coach Aitor Karanka will be boosted by the return of two players.

Defender Tomas Kalas and midfielder Adam Forshaw were both ineligible for Sunday's 2-0 FA Cup fifth-round defeat at Arsenal, but are available for the game at St Andrews as the Teessiders attempt to return to the top of the table.

Dimi Konstantopoulos is expected to return in goal after Tomas Mejias got the nod for the cup game, while full-back Ryan Fredericks will be assessed to check on any reaction to his resumption at the Emirates Stadium after an ankle problem.

However, central defender Daniel Ayala will miss out once again as he battles a thigh injury which could sideline him for a further three weeks