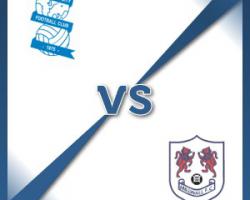 Michael Morrison, Gavin Gunning and Matt Green remain out for Birmingham when they host Millwall

Neal Eardley has been recalled from his loan at Leyton Orient but he will not be able to feature for Blues until 23 February as Orient are holding his registration.The defender was not playing enough games and Rowett made the decision to bring him back to St Andrew's

Lee Martin could return to the Millwall squad after missing out at the weekend.The winger was absent from the side beaten 3-1 at home by Huddersfield after failing a late fitness test on his bruised ribs.