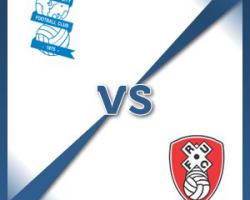 Birmingham V Rotherham - view commentary, squad, and statistics of the game live.Morrison back for BluesMichael Morrison will return for Birmingham against Rotherham after recovering from a knee injury

Boss Gary Rowett may also opt to rest Demarai Gray after his busy week with England Under-19s.Rotherham will be without the suspended Kari Arnason for the trip to St Andrew's.Arnason, who has been on international duty with Iceland, is serving the second game of his two-match ban for 10 yellow cards.Left-back Daniel Lafferty has returned fit and well from his exertions with Northern Ireland but Frazer Richardson will miss out with a calf injury.Boss Steve Evans has cast a doubt over Danny Ward's fitness after he suffered a knee injury just as he was about to make his return from a foot problem