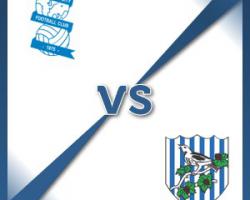 The winger has joined from Watford until the end of the season and will be in Gary Rowett's squad for the FA Cup fourth-round tie.The boss has confirmed he will make changes and Wes Thomas could start after his brace in the last round against Blyth Spartans.Gavin Gunning and Matt Smith (both knee) are long-term absentees for Birmingham

Jason Davidson is with Australia for the Asian Cup and midfielder Youssouf Mulumbu is on African Nations Cup duty with Congo.Jonas Olsson is training but is still not fit after an Achilles injury, although he could return next month.Silvestre Varela has left to join Parma after his loan from Porto was cancelled while Sebastian Blanco and Georgios Samaras are on the verge of leaving Albion on loan.Pulis believes West Brom have repaired their fragile confidence as he targets an FA Cup run.The Baggies head coach has underlined the importance of the cup ahead of Saturday's fourth-round tie at Birmingham.He is unbeaten in his first three games, including a 7-0 win over Gateshead in the FA Cup third round, with the Baggies also yet to concede a goal under him.They go to St Andrew's on Saturday for a midlands derby and Pulis thinks Albion have been lifted since his arrival.He said: "The players are a little bit different now to when we first walked in, there is a little bit more brightness around the place."Confidence is built on results, if you can put yourself through a run of games unbeaten and carry on to the next game - whether it's an FA Cup or Premier League game - keeping the momentum is important, building that up builds the confidence."We have to keep that going and add a few more players to the group."Pulis took Stoke to the 2011 FA Cup final, losing 1-0 to Manchester City, and has told his squad of the competition's significance.He said: "It's a proper cup tie, I'd rather we approach it the right way and we have spoken about it

We will let them know Friday and Saturday that it's a proper game and one we want to do well again."The FA Cup will always be special for people of my generation, personally it is the greatest cup competition in the world."