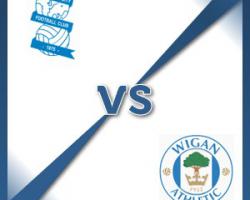 Birmingham are set to revert back to their strongest line-up when they host Wigan.

Boss Gary Rowett made 10 changes to his side as they edged past Blyth Spartans 3-2 in the FA Cup last week and is likely to rotate his squad again on Saturday.

Gavin Gunning and Matt Green (both knee) are Blues' only long-term absentees.

Martyn Waghorn could come back into the Wigan attack.

The striker played 70 minutes for the development squad on his return from a shoulder injury in midweek and is ready to increase Malky Mackay's forward options.

Andy Delort has a slight hamstring strain, Oriol Riera this week returned to Spain on loan and Grant Holt faces a year on the sidelines with a knee injury.

Defender Liam Ridgewell could make his debut after joining on loan on Thursday, winger Callum McManaman sits out the second game of his three-match ban, goalkeeper Ali Al-Habsi has gone to the Asian Cup with Oman and Emyr Huws is sidelined by an ankle problem