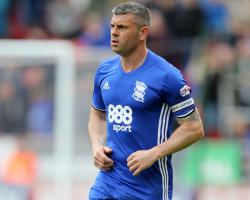 The charge relates to an off-the-ball incident during the derby game against Aston Villa on Sunday in which Robinson clashed with James Chester in the immediate aftermath of Gabby Agbonlahor's winning goal.

The Birmingham captain appeared to trip and then kick Chester, sending the Villa defender to the floor in an incident missed by the match officials at the time, but the FA have now acted after studying video footage.

An FA statement read: ''Paul Robinson has been charged with alleged violent conduct following the Aston Villa versus Birmingham City game on Sunday.

''Off the ball incidents which are not seen at the time by the match officials are referred to a panel of three former elite referees.

''Each referee panel member will review the video footage independently of one another to determine whether they consider it a sending-off offence.

''For retrospective action to be taken, and an FA charge to follow, the decision of the panel must be unanimous.''

Should the charge be upheld, Robinson will be suspended for at least three matches, ruling him out of the rest of the season as Birmingham battle to remain in the Championship

The Blues host Huddersfield on Saturday before a potentially crucial final-day trip to Bristol City.

The 1-0 defeat at Villa Park was his first game in charge and left Birmingham one place and two points above the relegation zone.