Changes at BIHL board 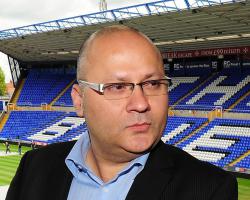 A statement to the Hong Kong Stock Exchange confirmed the changes which has seen seven directors also resign.

"The receivers are conducting investigation into the affairs of the company and will update the shareholders and the stock exchange with respect to any further developments concerning the said investigation as and when appropriate," a statement read.

The move effectively sees the receivers, Ernst and Young, in charge, with employees Stephen Lui appointed chairman of the board and David Yen Ching Wai as chief executive.

Peter Pannu, Birmingham's former acting chairman, has been removed from the BIHL board along with Chan Shun Wah.

Panos Pavlakis, who is effectively managing director at the club, has resigned but remains a director at St Andrew's.

Blues are 14th in the Sky Bet Championship and insisted the running of the club is not affected by the developments.

"The club can assure supporters and staff that this still very much the case - there is no change in the day to day running of Blues," read a statement.

Andrew's and work closely with Gary Rowett on all football matters, as per usual.

"The board also carries on working in unison and in full cooperation with the Receivers for the good of the Club."