Clements wait for a win goes on 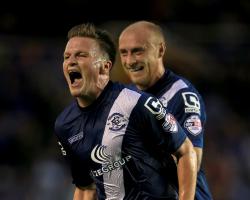 The midfielder struck a cool equaliser in an entertaining 1-1 draw to cancel out Stephen Gleeson's opener at St Andrew's.

Tom Ince, Darren Bent and Andi Weimann hit the woodwork for the Rams who have drawn all four of their Sky Bet Championship games.

The hosts, now unbeaten in their last 10 outings at St Andrew's, went close to a winner through Clayton Donaldson and Demarai Gray.

Clement made four changes with Cyrus Christie, Craig Forsyth, Russell and Bent returning, with Blues unchanged and it was the hosts who began the brighter.

An open game then saw Derby take the initiative and should have seen them grab the lead.

The Rams were comfortable on the ball but lacked the killer touch when it matter and Bent scuffed wide from 10 yards after the impressive Russell bamboozled the Blues' backline.

The former Villa striker then headed over three minutes later and Tomasz Kuszczak beat Ince's low drive away soon after.

Derby were on top but failed to make it count, although came inches away from opening the scoring after 22 minutes when Ince cracked the post from 25 yards.

It was a let off for the hosts but they regained their composure to take the lead out of the blue just before the break.

There seemed little danger when when Donaldson's shot deflected out to Gleeson but County failed to close him down and his ambitious 35-yard effort struck Chris Baird and flew low past Carson.

It seemed harsh on Derby and they nearly forced a leveller seven minutes after the break when Kuszczak did well to save Forsyth's effort while Carson denied Donaldson and saw Jon Toral poke the rebound wide.

And the miss proved costly when Derby levelled on 61 minutes as Russell smashed in high past Kuszczak after being put through by Ince.

And Chris Martin's claims for a penalty only saw him booked for diving as Derby's search for a win continued.