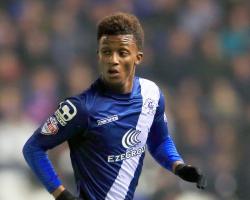 A product of Birmingham's academy, 19-year-old winger Gray has impressed this season in his 18 appearances for the St Andrew's club.

That form has seen Gray promoted to Gareth Southgate's player pool, having previously represented England up to Under-20 level.

The teenager joined up with the squad at St George's Park on Sunday after Redmond, another Birmingham academy graduate, withdrew from the upcoming European qualifiers against Bosnia & Herzegovina and Switzerland.

"Gutted to be out injured and have missed the game today! Also upset to pull out of the England 21s side! Time to get back fit!" the Norwich winger posted via his Twitter account, @NathanRedmond22.

England Under-21s play in Sarajevo on Thursday and take on Switzerland in Brighton on the following Monday.