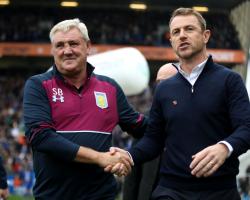 David Davis secured a 1-1 draw in the second half but Clayton Donaldson missed two fine openings, and Jacques Maghoma and Ryan Shotton also had chances.

Gary Gardner had given the visitors the lead - their only effort on target - as new Villa boss Steve Bruce failed to win on his return to St Andrew's.

Rowett's biggest summer buy was Che Adams for ÃÂ£1.4million and half of his matchday squad were free transfers, while Villa's summer net spend was ÃÂ£34million, and the Blues boss believes his team deserved to win

"I've been asked if I was pleased with a point and you'd have to say not really," said Rowett, who fears Rhoys Wiggins has suffered a serious knee injury after he was carried off on a stretcher while wearing an oxygen mask late on.

We competed magnificently well and were the far better team.

"When it's cost you ÃÂ£78million to put a team together like that and they've had to defend for their lives against Birmingham, you know you've done a decent job."

He said: "I had an itchy ear so I was just cupping my ear so I could alleviate the problem

I got a bit bored with it so I decided to give them a bit back, which the Blues fans appreciated

I'm not sure the police would have done.

He could have walked off with sheer embarrassment at some point

I've got no complaints though."

Donaldson hit the bar after 19 minutes with the ball bouncing on the line before being cleared and replays showing the whole of the ball did not cross the line, while Maghoma was thwarted by Villa goalkeeper Pierluigi Gollini

The point denied Villa a third straight Sky Bet Championship win but they are unbeaten in four games under Bruce, who managed Birmingham for six years before leaving in 2007

He said: "It was a fair result, a typical derby game where it was ferocious

In terms of effort and endeavour and sheer determination, there was nothing to separate the two of them.

"I'm not really interested in what happened a couple of months ago (at Villa) but certainly in the last two weeks they've shown a certain sort of resilience."

He had been deemed unfit, but Bruce has put him on another personal training programme and wants the 30-year-old to become a Villa hero again.

Bruce added: "He's probably been in a dark place but he's played in the big league all his life and scored goals

I'd be foolish to just discard him

It's my job to get the best out of him

If we can, he can be as good as any striker in this division."