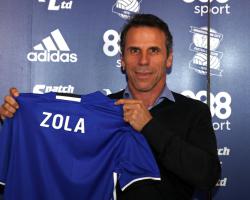 The Championship club announced on Wednesday afternoon that they had terminated Rowett's contract, and those of his backroom staff, and former Chelsea forward Zola was appointed that evening.

Rowett's sacking came as a shock with Birmingham only outside the play-off places on goal difference at the time, before Derby's victory at QPR later that day, after winning 2-1 at home to Ipswich the previous night

The Blues' previous two results were heavy 4-0 and 3-0 defeats to Newcastle and Barnsley respectively but they are the only two losses in the club's last seven league matches.

Zola has sympathy for the man who was so ruthlessly dispensed with.

He said: "Look, I do have sympathy for him

But I'm a professional too

"I feel for a colleague who has lost his job, but life goes on

I'm sure Gary will find a good job

When I was asked if I wanted the job, it wasn't easy because of the other manager but y ou make that consideration

"I haven't spoken to him but I will try to

If I feel right I will give him a call and extend my sympathy to him."

Rowett's departure has been met with anger by many Birmingham fans on social media, while some players also expressed their surprise on Twitter

Zola called in five senior players - Michael Morrison, Lukas Jutkiewicz, Paul Robinson, Jonathan Spector and Ryan Shotton - on Wednesday on what was a rest day for the Blues in an attempt to help ease the transition with the playing squad

"I need to prove my qualities to the fans but they should give us a chance, and I tried to put myself in the position of the players," said the 50-year-old former Watford and West Ham boss

"They are in a way surprised at this, like I was myself when I received the phone call

"I wanted to speak to the ones that are probably the players that could be the ambassadors for the others."

He said: "I am unlucky in a way as I only have one day to prepare the team

You have to be careful not to change too many things as you can do more damage than good."