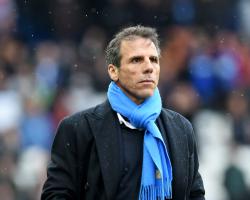 The 50-year-old Italian was appointed in December after the controversial sacking of Gary Rowett, but has overseen just two wins in 22 league games.