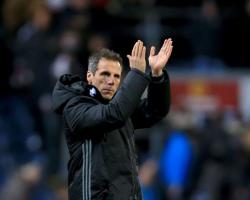 It means Zola's wait for a first win as Blues boss stretches on after an eighth game in all competitions without success.

His side started brightly and Lukas Jutkiewicz's third-minute penalty - his 10th goal this season - gave Birmingham the perfect platform to gain the first maximum of his tenure.

David Cotterill could have doubled the lead and they were left to rue not turning dominance into further goals when Danny Graham lashed home an equaliser in first-half stoppage time.

It's now five away games without a win, and Zola felt his side allowed their opponents back into the game.

He said: "I'm disappointed because I think we created our own problems

We went one up, in total control, a great chance to get the second goal

And then we stopped.

we stopped and we allowed them to come back

We fed their confidence by making those silly choices

So that disappoints me.

"Then it's been an open game, second half it's been open

They had one good chance and we had two great chances

We should have scored, though the second one was a great save from the goalkeeper.

"The disappointing thing for me is we let them come off the hook."

Despite the disappointment of failing to win, which leaves the Blues firmly in mid-table, Zola is fully confident his side will get it right.

That is exactly what is happening at the moment

But we're going to get there for sure because the team has desire and determination to achieve that," he said.

Blackburn boss Owen Coyle lamented Birmingham's "avoidable" opening goal but felt his side should have won and now they are only out of the bottom three on goal difference, he said today's point could be crucial in the final shake-up.

He said: "It's not the start anybody envisaged

I think it's such an avoidable penalty to give away and of course that plays into Birmingham's hands.

"At 10 minutes in, given we'd started with two strikers, we had to change to match up

From that point on, we dominated the game, really took charge of it, had one or two chances to get that equaliser and then when we did on the stroke of half time, it's such a wonderful team goal - the passing, the movement and exquisite finish.

"It was no more than we deserved at that point because we'd dominated from 15 minutes in.

"I felt in the second half we were the aggressors again, but always accepting Birmingham would be dangerous on the counter attack.

"Jason (Steele) made a save from Shotton late on but other than that, I don't recall too many clear-cut chances in the second half so for us, I think given the poor start, we were certainly worthy of three points.

"But there was a valuable lesson and that was if you can't get those three points, we made sure we didn't lose the game - we got a minimum of one.

"Who's to say that won't be a very important point?"