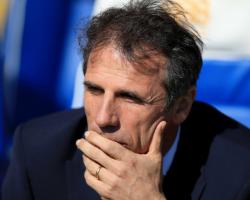 Zola has lost 13 of his 22 games - winning just twice - since replacing Gary Rowett in December and Birmingham have slumped from seventh to 18th, six points above the bottom three.

But the club reiterated their backing for Zola despite another defeat.

A statement read: "Birmingham City would like to clarify the situation in regard to Gianfranco Zola after recent articles in the media over the weekend: the club has not lined up any manager to replace Gianfranco, who has the continual full support of the Blues Board of Directors.

"Whilst we understand the frustrations caused by the run of results, the way the supporters got behind Gianfranco and the team on Saturday at St

Andrew's was typical of Blues fans' passion, care for the club and desire for success, which is what we all share and much appreciate.

"The board and all departments at the club are keeping united and standing alongside Gianfranco, his staff and the players, to try and play the kind of football every Blues supporter deserves to watch."