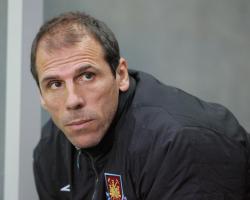 He was warmly accepted by the fans, despite his Chelsea links, but was sacked after his second campaign which ended with the Hammers in 17th place and chairman David Sullivan declaring the whole squad was up for sale, aside from Scott Parker.

Zola replaced Sean Dyche and led Watford to the Championship play-off final in his first season, losing 1-0 to Crystal Palace after extra-time, before resigning midway through the next campaign with the Hornets in mid-table.

A return to his native Sardinia was short-lived as Zola lasted less than three months before he was replaced by the man he had succeeded - Zdenek Zeman.

After one season in Qatar, Zola was sacked