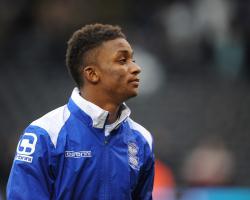 Gray has been the subject of multiple bids from Barclays Premier League newcomers Bournemouth, who it is thought made a fresh offer for the teenager last month

The 19-year-old made his breakthrough into the Birmingham first team during the 2014-15 campaign , scoring six league goals in 41 Sky Bet Championship appearances