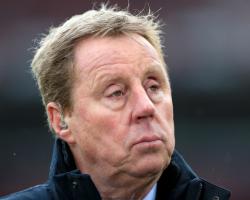 Redknapp's first steps in management came at Bournemouth, where he made more than 100 appearances as a player

He led the Cherries to promotion to the second tier as champions of the old Division Three in 1987, having also won the Football League Trophy in 1984

Bournemouth were relegated from Division Two in 1990 before Redknapp resigned at the end of the 1991-92 campaign.

After joining the Hammers as assistant to Billy Bonds, Redknapp took the hot seat in 1994 with the club about to start their second season in the recently-formed Premiership

He brought through numerous academy players during his time at Upton Park, including Frank Lampard, Joe Cole, Rio Ferdinand and Michael Carrick, as well as reinvigorating the career of Paolo Di Canio after controversially signing the Italian from Sheffield Wednesday

He guided Pompey to the top flight in 2003, winning the old Division One title with a free-flowing style of football led by veteran midfielder Paul Merson

After keeping the south coast club in the Premier League, Redknapp resigned in November 2004 following a dispute with owner Milan Mandaric

A few weeks after departing Pompey, Redknapp made the controversial decision to join their bitter rivals Southampton

His task was to keep the Saints in the top flight but he failed to do so before struggling to turn them into promotion contenders the following season and subsequently resigning in December 2005.

The cup win earned Portsmouth qualification to the following season's UEFA Cup, although Redknapp only enjoyed a brief taste of European competition on the south coast before moving on again.

During his time at White Hart Lane, he brought Champions League football to north-east London and assembled an attacking, entertaining team which defeated Inter and AC Milan before being knocked out by Real Madrid

Redknapp also helped develop the career of Gareth Bale, turning the Wales international into an attacking player, which ultimately led to his big money move to Madrid.

He oversaw two qualifying matches for the 2018 World Cup in Qatar, thrashing Bangladesh 8-0 in the first before losing 5-1 to Australia in Sydney.