Harry Redknapp- Birmingham have made John Terry a good offer 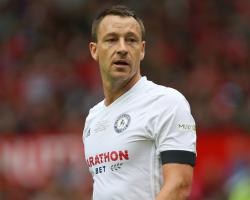 Terry will be a free agent on July 1 after ending his 22-year association with Chelsea at the end of last season.

A host of Premier League clubs have been linked with the 36-year-old centre-half, but Blues boss Redknapp hopes to tempt him into the Championship.

"I'd love to have him at the football club," Redknapp told talkSPORT.

It's up to John now, but we would love him at Birmingham.

"He played for me the other week in Michael Carrick's testimonial

"I had a chat with him and said to him come in - he's doing his coaching badges - have a year or two and who knows what he wants to do in the future?"

Top-flight sides Bournemouth, Brighton and West Brom have all been linked with Terry, as well as Birmingham's rivals Aston Villa and clubs from the United States and China.

Terry has said he will make a decision on his future after taking a summer break to weigh up his options.