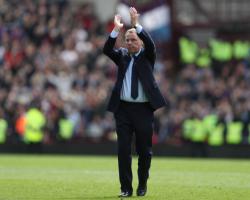 After inheriting a team which had won only twice in 24 matches, Redknapp scrapped the three defenders and wing-backs formation favoured by his predecessor Gianfranco Zola, who quit this week, introducing a rigid back four with Lukas Jutkiewicz the focal point of the attack as a lone striker.

For long periods it worked and the improvement in the team's performance was there for all to see, as a largely dour encounter looked headed for a goalless stalemate

"I take a lot of encouragement from that," said the 70-year-old

"The attitude has been terrific all week, everything we asked them to do in training they have done today

Would they be able to carry that on to the pitch with them? I thought they did

They worked their socks off, I can't ask for more from them

They gave absolutely everything

Don't get me wrong I know it will still be tough but I was really pleased with them today.

"Our keeper hasn't had a shot to save, I don't think he touched the ball did he? How we've lost that, I do not know

I could never see us getting beat

A point would have been handy so it was a blow not to get anything out of the game.

I hope the fans are pleased with what they saw today

I can't fault the effort."

"I have to say, Harry managed to sprinkle his magic in five days because the difference between them today and where they were last week was unbelievable

They showed they care and it was a really tough game," said Bruce.

So often the scourge of Birmingham, Agbonlahor's introduction from the bench just before the hour immediately brought life to the game

Making his return from a three-month lay-off with a hamstring injury, the 30-year-old was immediately in the thick of the action, getting involved in a scuffle with Ryan Shotton before being booked and showing his fists to the Blues fans.

He then made the telling contribution in the 68th minute, just nine minutes after entering the action, when he turned the ball home following a scramble inside the penalty area for his first goal since February 2016.

Bruce said: "He tried everything he possibly could to be fit and I'm delighted for him, because when he was close (to returning) last time he did his hamstring and was back in the treatment room

All the work he'd done was undone

"He showed what it means to him, he showed passion

As soon as he came on he's making a challenge, he's tearing after somebody

He lifted the whole stadium

"Fair play to him, he's won us the match

We've scored off a set-piece - a sloppy one at that