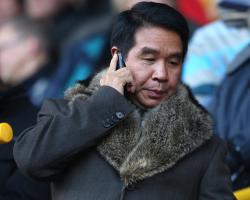 Yeung has been barred as a director of the club and is serving a six-year prison sentence in Hong Kong for money-laundering.

However, Birmingham's parent company Birmingham International Holdings Limited (BIHL) has made a statement to the Hong Kong Stock Exchange regarding changes Yeung - who owns 27.9 per cent of BIHL - wants to make to its board.

BIHL said Yeung is trying to force through changes to replace three directors with his own nominees and told the stock exchange it is "very concerned about the concerted efforts" of Yeung and his associates.

The Football League has now contacted Birmingham for clarification about Yeung's involvement.

A Football League spokesman said: "We have been in ongoing dialogue with the club in recent months with regard to changes in the shareholding of Birmingham International Holdings Limited (BIHL)

Further to that, we have now become aware of the announcement made yesterday by BIHL to the Hong Kong stock exchange.

"As a result, the Football League has written to Birmingham City today to ask for clarification as to whether this statement demonstrates that Carson Yeung should be defined as a 'relevant person' under the Owners and Directors' Test while being subject to a disqualifying condition."

It is understood Birmingham are keen to be as transparent as possible - it was BIHL itself which raised the issue with the stock exchange.

A statement from the club said: "The club is in receipt of correspondence from the Football League in respect of its holding company Birmingham International Holdings Limited (BIHL) following an announcement on the Hong Kong Stock Exchange.

"The club is seeking clarification of the matters contained therein from the BIHL board and will revert to the Football League in due course."

The Football League can take action against the club if it finds Yeung is still significantly involved with the running of the club, with possible sanctions including fines, points deductions or a transfer embargo.

The BIHL statement to the Hong Kong Stock Exchange questioned the appropriateness of the new directors suggested by Yeung and flagged up a connection with another major shareholder which would take him over the percentage of club ownership he is allowed.

Former hairdresser Yeung, 54, was jailed for six years in March for money-laundering - he continues to deny any guilt.

The BIHL statement said Yeung was trying to remove the chairman and two other directors and replace them with three others: Wang Man Li, Li Wen Jun and Arjun Kumar Gurung

According to reports Wang Man Li is his common-law wife and Arjun Kumar Gurung is his driver and bodyguard.