Managerial changes- The winners and losers 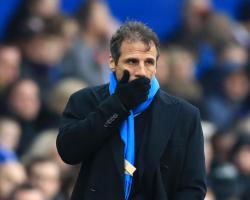 Rowett's average of 1.62 points per game this season was more than triple that of Zola (0.5 PPG) and though Birmingham are still 10 points clear of the relegation zone, their trajectory is alarming.

Here, we assess the impact of this season's managerial changes in the Premier League and Championship to see how Birmingham's compares.

Only three top-flight clubs - Swansea (twice), Crystal Palace and Hull - have changed managers this season.
Swansea took 0.57 PPG under Francesco Guidolin and 0.73 under his replacement Bob Bradley, the pair leaving them 17th and 19th respectively in the table

They are now 15th after winning four of their first six league games under Paul Clement (2.00 PPG).
Palace have declined from 0.88 PPG under Alan Pardew this season to 0.50 under Sam Allardyce, whose fortunes have not improved since losing his England job after one match

The Eagles have dropped from 17th to 19th after taking four points in eight games since his appointment.
Mike Phelan was August's Premier League manager of the month but the honeymoon quickly ended and he left Hull bottom of the table with 13 points from 20 games (0.65 PPG)

Marco Silva has started with seven in five (1.40) despite facing Chelsea, Manchester United, Liverpool and Arsenal in succession.

Jimmy Floyd Hasselbaink collected 20 points (1.25 PPG) before being sacked in November, with Holloway so far managing 17 (1.06).
Roberto Di Matteo drew seven of his 11 league games in charge of Aston Villa, who have improved from 0.91 PPG to 1.30 since turning to Steve Bruce.
The smallest impact can be seen at Wolves, who took 16 points in 14 games under Walter Zenga and 18 in the first 15 games of Paul Lambert's reign

Caretaker Rob Edwards oversaw a draw and a defeat in between times.