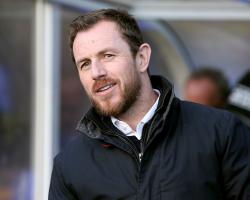 The Blues have climbed up to 11th place in the Championship table after winning four and drawing one of their last six league games.

In the middle of that stretch, Rowett took the chance to rest a number of players for their cup trip to Blyth Spartans, where City survived a scare by coming from 2-0 down to prevail 3-2.

With local bragging rights on the line this weekend, Birmingham will now bid to beat Albion for the first time since October 2006.

"Most of the fans are realistic enough to know we're having a good run and it might not last forever, but it might, so why stop that?" Rowett told the club website.

Cardiff have won only one of their last eight league games but Russell Slade will still go into their tie with Championship rivals Reading in an upbeat mood.

The Bluebirds boss plans to deploy former Manchester United full-back Fabio in midfield following a spell on the sidelines.

"He likes going forward, taking people on and putting the ball into the penalty area," Slade told Wales Online

"He has a certain quality to do well in that area."

Derby star Jamie Ward is looking forward to facing his former club Chesterfield, with the 28-year-old Northern Ireland international having scored 31 goals during two years with the Spireites.

He told Rams Player: "It is always nice to play against your old team and I am sure it will be a great occasion as they are bringing a big away following down with them.

"I hope I get a good reception from their fans and it would be nice to thank them for their support whilst I was there."

Sheffield United will look to follow up Wednesday's encouraging Capital One Cup semi-final first leg display at Tottenham with another good performance at Preston, having beaten North End 2-1 at Bramall Lane in League One a fortnight ago.

Fulham are unbeaten in their last five trips to the Stadium of Light, having secured two wins and three draws there prior to being relegated from the Premier League last summer.

And manager Kit Symons insists his side travel with confidence.

He said: "It's a bonus game but I would expect us to go and win at Sunderland.

"They are a Premier League side with some quality players but I have such a belief in this squad of players I would expect us to go up there and get a result."