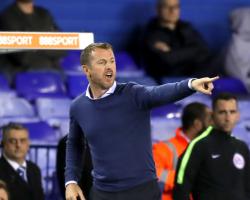 "It means that, as a club, we have new owners - and we welcome all at TTA into the Blues family and we look forward to exciting times ahead at St

Andrew's under their guidance and with their backing."

Yeung was jailed in 2014 having been found guilty of money laundering.

TTA had been offering financial backing to Blues for some time and little is likely to change at the St Andrew's club with the group remaining as owners for at least two years.

Birmingham are sixth in the Championship and host Rotherham on Tuesday