What is going on at Birmingham 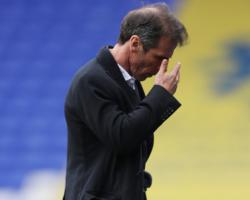 The much-travelled Redknapp has managed six other clubs in England, including taking Tottenham into the Champions League and winning the FA Cup with Portsmouth.

Here Press Association Sport takes a look at how Birmingham came to appoint him as their manager and what the future could hold at St Andrew's.

How did it come to this?

Following just two wins and seven draws in 24 games Zola quit on Monday after the defeat to Burton, a match which ended with Birmingham fans chanting "we want Zola out" and the club just three points above the relegation zone.

How did Birmingham's owners get it so wrong over Zola?

TTAL announced the appointment of Zola on the same day Rowett was sacked and backed the Italian with money for signings in the January transfer window and also with a public announcement that his job was safe on April 10, only for a subsequent 1-1 draw at already-relegated Rotherham and the defeat to fellow strugglers Burton to then be followed by his resignation.

Can Redknapp keep Birmingham up?

Redknapp has an impressive CV having managed Bournemouth, West Ham, P ortsmouth, Southampton, Tottenham and QPR and having steered Pompey to an FA Cup win in 2008

What will happen next season at St Andrew's?

The remaining three games will show him which of the current squad have the stomach for a fight and, should he stay, he will look to TTAL to fund a summer spending spree to try to reverse the downward spiral the club's playing fortunes took under Zola

What does the future hold for Birmingham?

The owners certainly backed Zola who signed several players in January and Redknapp, or his successor, will have a rebuilding job on their hands

Sheffield United have only just secured a return to the Championship after dropping into League One in 2011, showing how hard it is to get back.