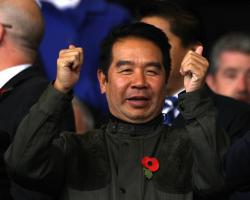 Yeung was jailed for six years in March 2014 after being found guilty of five counts of money laundering between 2001 and 2007.

The businessman's appeal was rejected by the Hong Kong Court of Appeal on Wednesday.

There will now be an adjournment until May 15 when a decision will be made on his appeal against his sentence.

The 55-year-old was arrested and charged with money laundering two years later.

He resigned as president of City and chairman of the club's parent company, Birmingham International Holdings Ltd (BIHL), in February last year.

Receivers Ernst & Young are currently in control of BIHL and have listened to offers for the parent company or the club itself.