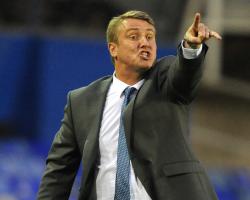 Birmingham 0-2 Sheff Wed: Match Report - view commentary, squad, and statistics of the game as it happened.May on target as Owls sink BluesSummer signing Stevie May netted a vital opening goal as Sheffield Wednesday secured a 2-0 win over Birmingham at St Andrews.The Scotland Under-21 international, who joined the Owls in an B#800,000 move from St Johnstone last month, notched his second goal since moving south in the 68th minute to provide further evidence of Wednesday's quiet revival under manager Stuart Gray.The visitors sealed the three points with a second goal a minute from time through substitute Jeremy Helan.The win was just reward for the visitors' positive play, with the return from suspension of skipper Glenn Loovens another important factor in their victory.Birmingham again dropped home points - a major problem for the Blues last season - as their struggles to get out of the lower reaches of the Sky Bet Championship continued.As usual, Birmingham operated a free-flowing attacking formation but it was matched by Wednesday, who refused to be over-awed by the midlands club.The result was some open fast play from both sides, with Clayton Donaldson wasting a glorious opportunity to put the hosts ahead in the opening five minutes.Atdhe Nuhiu could count himself unlucky not to have given Wednesday the lead three minutes later with a first-time glided shot which went just wide of the far post.The near-misses continued, particularly from the home side

Wes Thomas headed over from Dave Cotterill's cross, while newcomer Brek Shea shot into the side-netting.Wednesday had another let-off when Paul Caddis let rip with an swerving 20-yard effort which crashed against the outside of the post in the 33rd minute.Goalkeeper Kieren Westwood showed great bravery when he foiled Thomas in a one-on-one situation just six yards from the Wednesday goal.Westwood's opposite number Darren Randolph distinguished himself in a similar manner in the opening exchanges of the second half.He parried Chris Maguire's shot and then dived at the feet of Jacques Maghoma to prevent the Wednesday player scoring from close range.The Owls were the more dangerous in the second period, although Nuhiu collected an unusual booking

With a colleague lying injured, he caught the ball from Westwood's clearance and was promptly booked by referee Jimmy Adcock.Birmingham were forced to resort to some strong tackling to repel Wednesday, with Maguire and Nuhiu proving particularly troublesome.But Scot Stevie May eventually put Wednesday ahead in the 68th minute

He collected a pass on the left and moved with great purpose across the edge of the penalty area before firing a low shot through a packed Birmingham defence.Maguire, who had a fine second half, then carved out the opening for Helan to settle the game in the 89th minute, to the consternation of the home fans