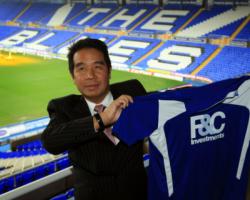 City show character to deny ClaretsOn-loan Manchester United striker Federico Macheda salvaged a valuable home point for battling Birmingham with a last-minute equaliser in a 3-3 thriller.Burnley had appeared to have settled the game when Welsh international Sam Vokes gave the Clarets the lead for the third time in the game with an 86th minute goal - only for Macheda to notch his second goal of a thrilling encounter.A cross from Tyler Blackett was back-headed by Lee Novak for Macheda to chest the ball into the net.Burnley appeared to be heading for victory on several occasions but they reckoned without the tenacious spirit of the Birmingham side.The Clarets, however, increased their unbeaten run to seven games to consolidate their second in the table place in the Sky Bet Championship.In a hectic second half Burnley's goalscoring machine had to pull out all the stops.Dean Marney and Michael Duff were on the mark for Burnley only for a dogged Birmingham to hit back three times to earn a valuable point with Macheda and Emyr Huws scoring their first two goals.However, despite the fighting performance Birmingham's run without a home win was extended to an embarrassing 13 successive games.With four changes from the side beaten by QPR on Saturday, the Birmingham side produced some refreshing attacking play to give an indication of their potential in the later stages.Unusually Birmingham's manager Lee Clark, who usually prowls the touchline, passively took refuge in the stand - until the Clarets took a first half lead.Andy Shinnie, recalled by Clark to the Birmingham side, caught the eye on several occasions although he wasted a good opportunity when he shot wide.The enthusiasm of the Birmingham side was reflected when Lee Novak picked up a Jonathan Spector pass, cut inside, and flashed in a shot which Tom Heaton easily saved

Burnley attempted to use the early pace of Danny Ings but the rapidly improving Will Packwood was generally alive to any situation in this opening spell.However, in the 30th minute Burnley's relentless pressure finally paid off when Dean Marney was on hand to head home from close range

Spector undid good work when he headed the ball down from an Ings short cross into the path of the Clarets goalscorer, who grabbed his third goal in seven games.The breakthrough eased Burnley's early anxiety and their play became more fluent and dangerous to give a good indication of their current high profile play.Tenacious Birmingham, however, refused to bow and Burnley had an escape when Novak narrowly failed to make connection to a low cross from Chris Burke early in the second half.Clark sent on Macheda on the hour and within four minutes it had paid off with an equaliser as the substitute shot under the body of Heaton following a free-kick from Paul Robinson.But Birmingham's joy was short-lived as Michael Duff headed home Kieran Trippier's angled free-kick in the 67th minute.It was then Burnley's turn to suffer a setback as Huws produced a spectacular 70th-minute equaliser with a blockbuster of a shot from fully 25 yards.Vokes then converted a cross from Junior Stanislas in the 86th minute only for Macheda to deny the visitors with his late, late equaliser