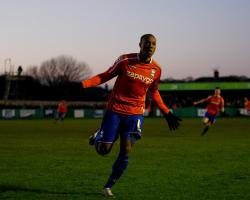 Part-time barman Dale served up a pair of delicious finishes towards the end of the first period as the Evo-Stik Premier underdogs threatened to write another famous chapter in their storied FA Cup history.

But a one-sided period at the start of the second half shattered the Northumberland club's hopes as Lee Novak narrowed the deficit before two strikes from former non-leaguer Wes Thomas nudged Gary Rowett's men home as 3-2 winners.

Blues must have known they were in for a battle when their arrival at the 4,400-capacity stadium was greeted by a horde of home fans in Spartans warrior outfits, and they could not have looked less impressed by the bone-hard and bobbly pitch.

Perhaps the sight helped Rowett decide to hand Nikola Zigic a rare start up front and the 6ft 8ins front man had the ball in the net after eight minutes only to see the effort disallowed for a foul in the build-up by Michael Morrison.

Zigic then missed a golden chance two minutes later when Novak crossed from the right and the towering striker somehow contrived to sweep the ball over the bar from seven yards out.

The visitors came to rue their early opportunities and goalkeeper Colin Doyle almost handed the hosts the lead on a plate when his kick ricocheted off Daniel Maguire and dropped inches wide.

Blues were suddenly floundering, with Jarrett Rivers, Blyth's last-minute goal hero in the second-round win at Hartlepool, causing problems down the flanks and Stephen Turnbull firing a low free-kick straight at Doyle.

Blyth made their breakthrough in the 35th minute when Rivers wriggled between Neal Eardley and Guy Moussi in the left side of the box and crossed low for captain Dale to slide home a cool opener for the non-league side.

And seven minutes later Dale struck again, picking up Turnbull's short free-kick and twisting into the box before unleashing a superb right-footed drive to the right of the diving Doyle.

Doyle palmed away a rising shot from Maguire in first-half injury time and the visitors left the pitch looking shell-shocked and desperately in need of an early breakthrough in the second period.

Novak sparked the visitors' dramatic comeback when he drilled home in the 52nd minute, moments after Blyth goalkeeper Peter Jeffries had bravely plucked the ball off Mark Duffy's toes.

Then Thomas turned the game on its head with two goals in four minutes, first an angled drive from the edge of the box followed by a 58th-minute header which squirmed over the line despite the best efforts of the home defence.

Blyth's cup pedigree alone dictated they were anything but beaten, and Dale went close to completing a hat-trick in the 65th minute when he was played into the left side of the box by Daniel Hawkins but fired wide.

Substitute Danny Parker headed wide in the dying minutes, then Maguire bustled through the middle and blazed a shot over the bar as the home side went down fighting.